Today was my first day back volunteering at RHS Hyde Hall and it really was great to be back!

I’ve not been there in my volunteer role since the end of the summer term, although have been a few times (not enough for my liking) in my visitor and parent role during the holidays, and have missed the sense of peace and joy it brings me. Just walking up the hill at the beginning of the day is enough to restore ones equilibrium after a hectic school run! 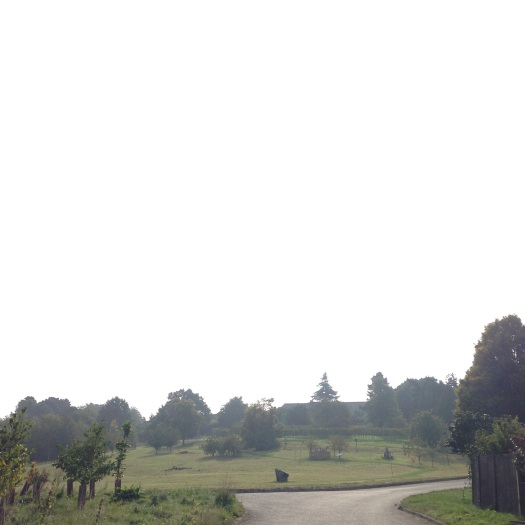 And so much has changed during those six weeks! The last day I helped out, the last activity we did was bug hunting in the tall, nearly waist high grass on the hill. Today I found the meadow has had its annual ‘trim’ and it was a totally different atmosphere!

It was far quieter – no wind whispering through the grasses and only a few birds singing instead of the choir of crickets. The stillness is not better or worse, just different. And with its new, slicker ‘do’ the meandering pathways appear and treasures are revealed. 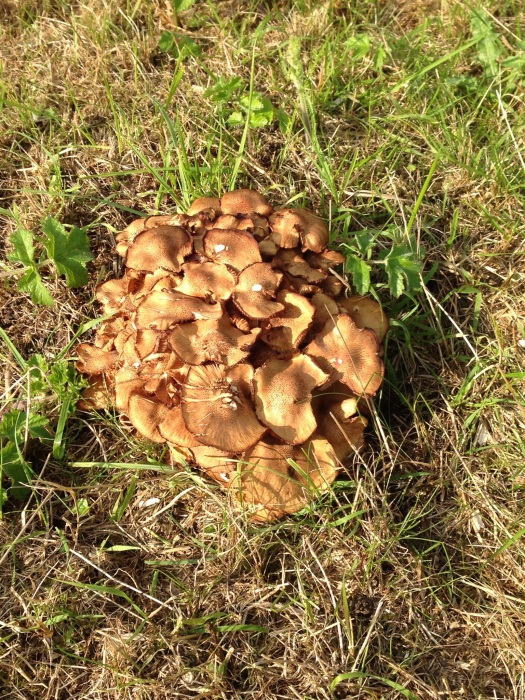 Isn’t it a beauty?

And all of this wonder before I’ve even met up with my fellow volunteers and had a catch up!
When I got to the top if the hill, I headed for the volunteers kitchen/break room to sign in and literally gasped with joy when I saw the amazing ivy on the wall. The colours are stunning! 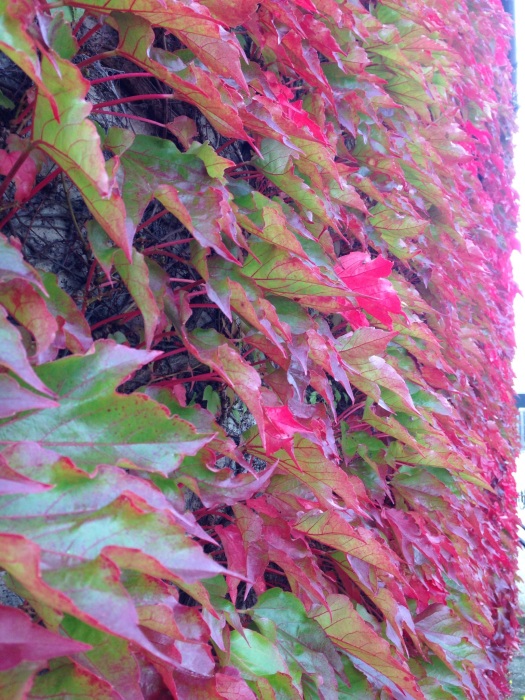 Today, after Charlotte’s introductory talk, we took the children out into the garden to look at all the different kids of rock used in the garden – they are learning about geology at school – and, while we were out , it gave me chance to take a few snaps.

I love the different colours, texture and how the light bounces off the pond…so many things.

So what is my favourite sight this week? It has to be that amazing, ivy clad wall!

If you would like to visit RHS Hyde Hall, then you can find more details here . Or, if you fancy a more hands on role, you can contact the volunteer coordinator Lara here .

Yesterday I had the pleasure, rather surprisingly, of attending my first and, obviously, last Speed Awareness course. Run by John and John from Essex County Council, it was held in the Green Centre, Wat Tyler Country Park.

I arrived suitably early (I can hear the roar of disbelieving laughter, but it is true!) and nervously headed into the waiting area. Who would be there? Would they be friendly? What would the course be like? So many things to worry about!  I need not have stressed! The waiting area was light, bright, had tea on tap and was filled by a mixed group of fairly friendly looking people. I can’t go into specifics due to confidentially (what happens in the Speed Awareness course, stays in the Speed Awareness course) but I can tell you that the room comprised of men and women of varying ages and backgrounds which just goes to show, there are no ‘typical’ naughty folk who speed!

We settled into the training room and, after a brief introduction, John kicked off with the first half of the training.  I always think it is a good sign when a training session feels more like a night out watching Live at the Apollojust without the alcohol, than anything else. John’s style of delivery ensured that our random group of people not only listened but actively engaged in the session which was fab as this was one of the strict criteria detailed in the conditions of the course offer.

Clearly Essex County Council have a great training for trainers programme as, John’s session is only pipped to the ‘Best Training Session Ever’ title by the fabulous Talk, Listen, Cuddle course I attended run by Sian Ansell – she was fabulous and if you ever get a chance to attend a course she is running, grab it!

After our tea break, John stepped out and John took over with a different style of presentation, still friendly and approachable but slightly more serious. Given that the second half of the training included more emotionally charged content, I think it was a good choice.

So what did I learn? Lots! Here are my top five new things I’ve learnt *queue Top of the Pops count down music*

At Number 5… I wasn’t so surprised to learn that I had very little idea of the various speed limits on different  roads and for different vehicles but I was surprised to learn that I thought they were much lower than they actually are.  Although this is good because it means I have been driving well below the speed limit on many roads, it also means that I could have caused an accident as I was not acting as other drivers would expect me to.

At Number 3… The latest edition of the Highway Code has 40 new rules and 5 new signs!

At Number 2… I learnt that all those pesky motorbikes who weave in and out of the traffic are NOT breaking the laws of the Highway Code after all! If you don’t believe me, you will find the relevant bit in Rules for Motorcyclists, section 88.

And coming in at Number 1… The whole “10% plus 2-ish” rule when it comes to being booked for speeding is a total MYTH! You can get booked for speeding if you are doing 1 mile above the limit.  The “ish” rule, as John called it, is purely for guidance given by the Association of Chief Police Officers and it is at the Police Officer’s discretion as to whether or not to follow it!

So, what can I do with all my newly acquired knowledge and understanding of speed limits and driving safely? Well, I am going to COAST! Don’t panic though, I shan’t be blithely driving around without a care in the world! What does COAST stand for?

What I think is interesting is that not only can I apply COAST to my driving technique but I think it will prove to be quite useful to apply it to my life in general!!

Mmmm…first, home grown strawberry of the season! Such a tasty treat, especially as this one came from a hanging basket that was left over from last year that I have basically ignored!

I felt quite naughty really. I was on my way to collect the children when I spotted it and…erm…to save them from the argument about who should have it, I ate it and thoroughly enjoyed it’s super sweet, juicy, yumminess all to myself!

And what is this glorious variety called that appears to need no love or attention? Well it is Fragaria (which I think is Italian for strawberry!) ‘Tristan F1’ which is a trailing variety ideal for hanging baskets. I got mine at an event organised by the PTA of my children’s school, Grange Primary PTA, to raise funds for the school where our local green grocer, Krunchy Karrot, came into the school with a selection of flowers and vegetables for sale. This was a win win situation, as we got great products, a local business was supported and the PTA was given a donation by Krunchy Karrot!

So, not only did my lovely strawberry taste great, I felt great (ignoring that I’ve deprived my children if this glorious first fruit experience!) as I supported causes close to my heart! Hurrah!

In an effort to redeem myself for stealing the first fruit of the season from my children (I do feel bad…honest!) I shall end with a quote from William Allen Butler

“Doubtless God could have made a better berry (than the strawberry), but doubtless God never did.”
William Allen Butler

I had the pleasure of visiting RHS Hyde Hall not once but twice this week! Both visits were arranged to catch up with good friends, one who I haven’t seen for too long and one who I just can’t get rid of…only joking…who I see on a more regular basis but with our children in tow, so conversation is somewhat stilted.

I must confess that the second visit was spent entirely in the Field Café catching up with my friend over a cup of their lovely broccoli and stilton soup with one of their super yummy cheese scones. However, on the first visit of the week we popped out to have a look at the RHS Hyde Hall WI Christmas Trees which were fabulous! 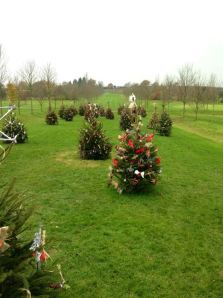 RHS Hyde Hall had invited the ladies of the  Essex WI to decorate a Christmas Tree with the only requirement, this year, being all the materials to be ‘compostable’. All decorations had to be made of natural materials which could be spray painted to add interest and colour. The ladies really stepped up to the challenge and used reeds and grasses, nuts, teasels, poppy and other seed heads, fruits, paper and many more lovely, natural items.

I may have been a little inspired by the lovely trees and taken one or..er..two photos to share with you! My favourites include the little candles made of spray painted clementine skin with a twig and some string for the candle; the Sycamore seeds with rose hips; the wooden spoon angels; and the poppy seed head, conker and chilli tinsel! 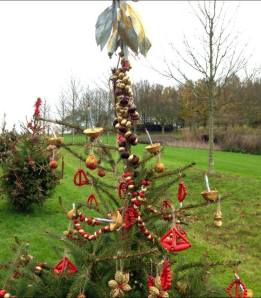 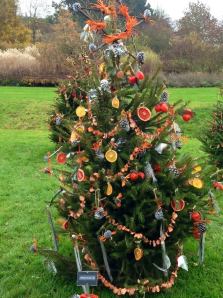 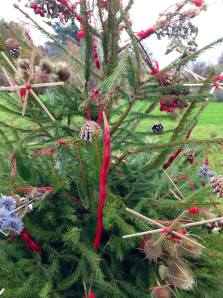 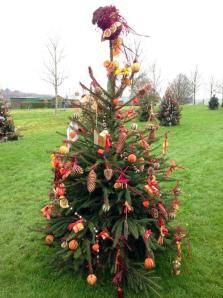 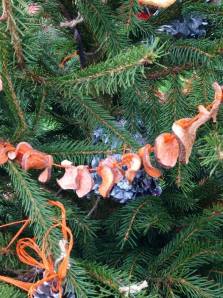 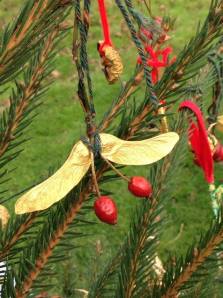 I hope you have enjoyed this whistle stop tour around the lovely WI Christmas Trees at Hyde Hall – do try and get along to see them in person!