I love buttons.  I always have. I can’t quite pin down what it is about them that I love – how pretty they can be, how they feel, how they sound – but whatever it is that draws me to them, I love them!

Now buttons, generally, are not like Marmite (other yeast spreads are available) as in it it’s not a case of you love them or hate them, there is a more even spread of feelings about buttons.  However, there are extremes.

My lovely friend Liz had a phobia of buttons, specifically on clothing, called koumpounophobia.  I had never noticed that she never wore buttons until one evening, when I was sharing a house with her, she asked if I could cut the buttons off a new top for her.  She had, she told me, always been afraid of buttons but, as an adult, had managed to manage her fear enough to be able to cut them off and let them drop into a box that she kept under her bed.  I found it really interesting that she would keep the thing she feared so close by but I guess, she thought it best to know where they were!

At the other end of the scale are those, a bit like me but more so, who LOVE buttons!  I’ve not been able to find a scientific word for the love of buttons but I have found a few blogs and websites belonging to fellow button lovers!  Like the lady from Button Obsession who’s love for buttons resulted in starting her own online button shop  and Glenyce, from the blog Midcraftcrisis, who asked for buttons for her birthday and, amongst lots of other lovely buttons, received the ‘Family Button Box’ from her Auntie Jill.

Glenyce’s Family Box of Buttons brings me back to what inspired me to write about buttons today.  We are visiting my brother in law and, while looking for a needle and thread, my OH found his late Mother’s box of buttons. Who’d have thought that this little, battered old biscuit tin could trigger such an outpouring of love, affection and memories! Just the way he held the tin, gently and lovingly in his hands showed how precious the memories are that are held within it.

Some buttons had no meaning or memory for him at all and made us wonder who had worn them.  Others instantly brought back a happy memory of a favourite childhood item. And others had ‘always been there’ and, despite having no special person or event attached to the memory, provided a sense of continuity, safety and home.

I am very jealous of my big sister, Susan, who inherited our Family Box of Buttons from my maternal Grandmother.  Not only is it an amazing box of buttons, it is also a really lovely old, wooden box!  I can picture it clearly now, feeling the weight of it and gently opening the lid to reveal probably a hundred years of buttons and memories – a real treasure chest!

Two particular buttons I can picture in my Nanny’s button collection are a shiny brass button and a white, twinkly plastic button – both of similar sentimental importance to me.  I always imagined the brass button had come from the army uniform of my Nanny’s husband – he sadly died in the Second World War when my Nanny was six months pregnant with my Mum.  I used to hold the button and wonder what it would have been like to have a Granddad and how brave he must have been.  The white, twinkly plastic button was a spare from this fabulous cardigan my Nanny knitted me which had a mix of buttons on it (possibly from the button box!) which seemed very grown up to me!  There were two of the white, twinkly ones which looked like opals, a clear twinkly crystal like one and two red twinkly ones which looked like rubies!

I loved the cardigan which was knitted from some fantastic white wool with rainbow flecks running through it!  That little plastic button reminds me of all the other lovely buttons on the cardigan, the cardigan itself, my lovely Nanny who knitted it for me, the excitement of opening it on my birthday and feeling like a grown up princess and being even more excited to find another little parcel which contained a knitted bikini in the same wool for my Cindy – all that from one button!

As I won’t have the honour of custody of the Family Box of Buttons, I have started my own. I didn’t do this consciously, just initially keeping the odd spare button in a drawer from new outfits of my own and then, once I had my own children, all the spare buttons from their outfits.

I have since transferred the buttons to a little, flower covered tin that my Mum gave me a few Christmas’ ago which had been filled with toffees (I think). It still looks quite shiny and new but I am looking forward to bringing it out when I am a grandmother myself and showing my grandchildren all the lovely buttons I will have collected, telling them about all the wonderful people whose buttons they were and helping to create lovely memories for them to share with their children. 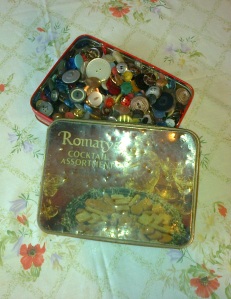